What food can we eat to stay within the boundaries of planet Earth? What would a meal that adhered to those restrictions look like in Sweden? How could I show that my restaurant serves such meals? The WWF Sweden One Planet Plate concept gives practical guidance and answers to these questions.

In Sweden, food accounts for about 25% of the climate impact of households. To reduce our climate impact, we need to increase the portion of vegetables eaten in a meal, including plant protein, and eat less but better meat. As well, food production affects important ecosystems and biodiversity worldwide. Therefore, our food choices also need to reflect a greater consideration for the environment.

With WWF Sweden’s One Planet Plate, we take into account both the climate and biodiversity. It is an easy way to make a difference, one meal at a time.

Together with scientists and influential thinkers in Sweden, WWF Sweden has developed criteria for meals that stay within planetary boundaries with regard to two aspects of sustainability: climate and biodiversity.

We calculated the climate impact a meal could generate in order to stay within the limit of maximum 1.5°C global warming. By using data from IPCC 2018 on the amount of carbon that humanity can consume and stay within 1.5°C global warming, and assuming an allocation to food of 50%, we found that a global climate budget for food per week is 11 kg CO2e per person. Breaking this number down to the context in Sweden, we allocated 0.5 kg CO2e for a lunch or dinner (and 0.4 kg CO2e for a breakfast, leaving 0.2 kg CO2e for snacks and extras).

Since biodiversity is a complex issue and harder to calculate, we decided to use the established WWF Sweden’s Meat Guide and WWF Sweden’s Seafood Guide as guidance for animal products. For meat, eggs, cheese or fish to be included in a One Planet Plate meal, a green light in the guides is required. This means, for example, that meat allowed in a One Planet Plate meal does not come from animals that have eaten soy which caused deforestation or land conversion. Natural pasture meat and most types of organic meat qualify. Seafood with a green light comes from sustainable stocks and fisheries.

Since the loss of species in farmland is an important issue, and the national goals for biodiversity have not been met, we also established the criteria that important field-grown plants consumed in large quantities in Sweden need to be produced using biodiversity measures in the fields, for example organic certification. The crops of concern are cereals, potatoes, onions, carrots, rice and canola. In addition, it is prohibited to use orange-light classified vegetables in WWF Sweden’s Veggie Guide.

Use as a Guide or a Label

One Planet Plate is available as a guide for consumers or restaurants and as a label. Use of the guide is free of charge. Use of the label involves a cost as an independent third-party audit is required. Restaurants wanting to use the label also need to use an approved calculation tool/database to calculate the climate impact of the meals.

The concept was launched in March 2018, and there is great interest from meal providers.

The actors involved in public meals in Sweden are especially interested. They have high standards and there is a growing interest in setting sustainability goals for meals in public institutions. WWF has been invited to inform and educate several thousands of meal managers in public institutions, school chefs, meal planners, etc. Several municipalities have already set climate goals equivalent to the One Planet Plate climate budget for meals.

Other large private meal providers have also shown a great interest and are adjusting their climate goals. ICA, the largest food retailer in Sweden, has launched a “Climate home delivery meal bag” using the One Planet Plate climate budget.

WWF has launched a website with recipes for schools that follow the One Planet Plate criteria and meet the nutritional requirements and economic restrictions for school meals. One Planet Plate recipes can also be found at Köket.se, one of the largest Swedish language recipe websites. 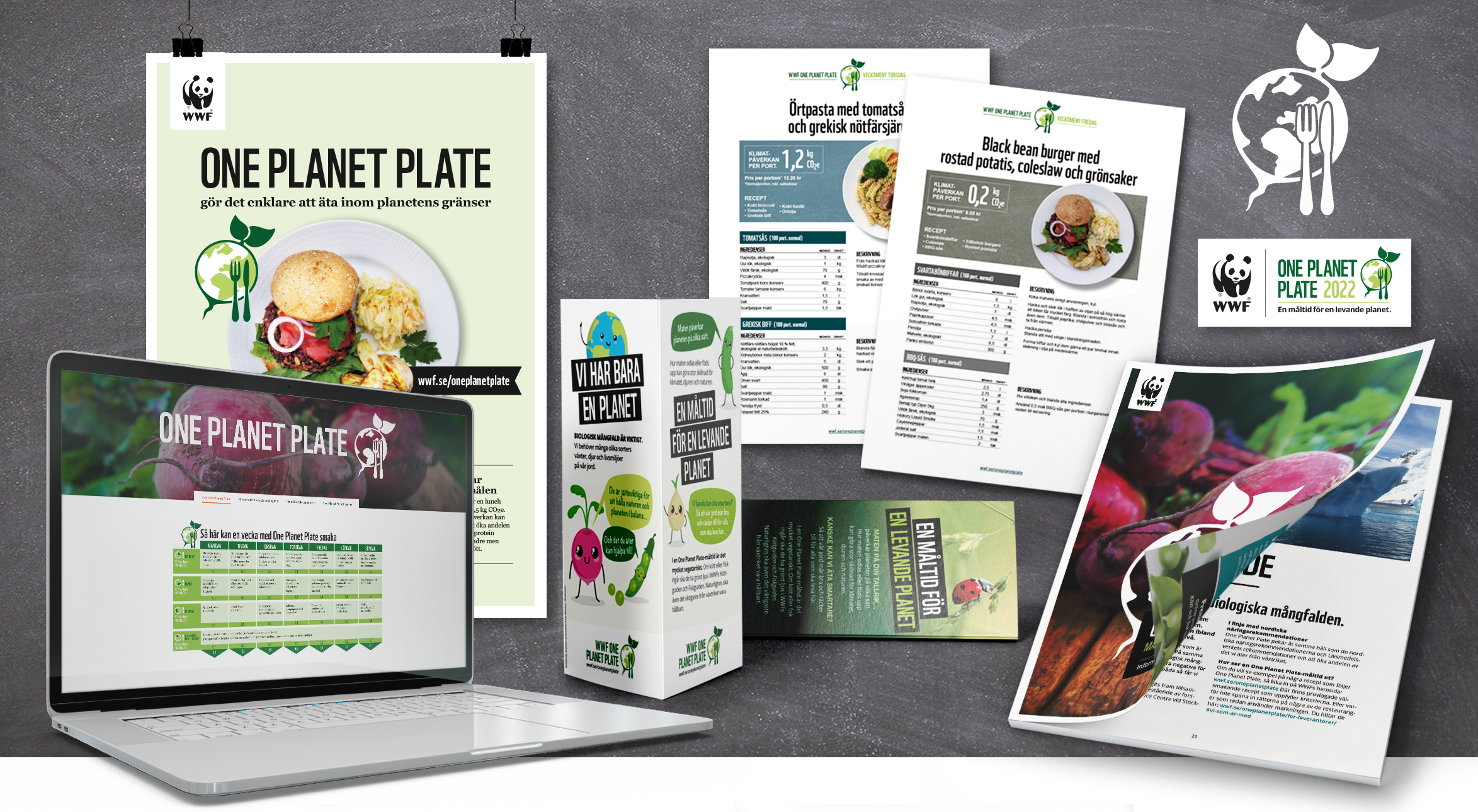 Information about WWF Sweden One Planet Plate for both the public and meal providers is at wwf.se/oneplanetplate.

Through an ongoing dialogue with users of the concept, we have gained insight into the needs that occur in their daily activities and how we can facilitate the transition to more sustainable meals. With the help of their feedback, we have produced various materials (in Swedish) which include: inspiring climate-calculated recipes, examples of a weekly menu (breakfast, lunch, and dinner) that stays within the climate budget of 11 kg CO2e per week/per person, menus based on food grown/raised/gathered in Sweden, detailed information for label users, and display materials for dining rooms. In addition, we have also developed a food calculator where the public can test the impact of a meal on the environment and climate.

“With One Planet Plate, we can show all students with a high level of environmental awareness that we think about the environment in connection with school meals, and that we don’t just talk about it but also act. One of the many positive results is that commitment and knowledge has increased in kitchens!”